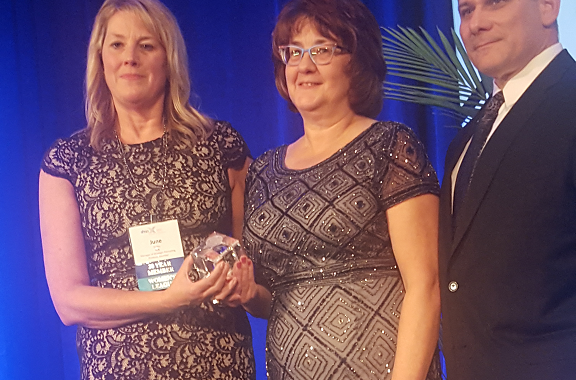 Vonda Howell, Vice President of Operations at Trion Industries, received the Shop! Woman of Distinction Award for her leadership within the retail industry and local community.

Shop!, the international retail trade association with over 2,000 member companies worldwide, presented the Woman of Distinction Award on Thursday [November 9th] night at their annual meeting, held this year in San Antonio, TX. This was the first year the award was presented and Howell was one of only three women worldwide to receive the recognition. The Shop! Woman of Distinction Award celebrates the success and achievements of women working within retail environments. It recognizes women who have truly excelled, not only in their professional lives, but also as leaders and role models to other women.

Vonda began her career at Trion in 1998 in a Chief-of-Staff roll to the senior Executives at Trion’s headquarters. Over the years she rose to Vice President of Operations overseeing and managing all corporate functions including manufacturing, distribution, maintenance, IT, production scheduling, and the tool room. In addition, she advises on all other aspects of the business including sales, customer service, engineering, finance, human resources and quoting.

Vonda’s accomplishments have touched and inspired many lives. Numerous women are key to Trion’s functioning, with a number directly in charge of operational elements including Shift Production Management, Powder Coating, Packing, Production Scheduling, Human Resources, and Customer Service. Paralleling Vonda’s career advancement, most of which as a single parent, she raised and educated two daughters, purchased her own home, and cared for her sick mother, duties with which many can relate. Howell was a Deacon at Covenant Presbyterian Church in Scranton; she’s actively involved in her local school and supports Trion’s community efforts with Family Service of Northeast Pennsylvania, the local United Way and many other organizations. Howell was born Vonda Mellmann in Osage, Iowa.