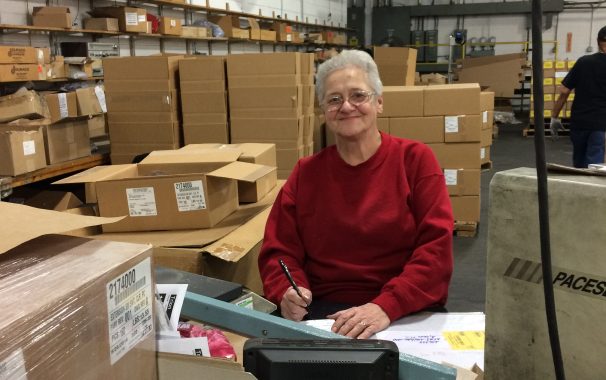 Dorothy Middaugh is taking the next step and retiring.

In 1995, Dorothy needed a job and thought to give Trion Industries a shot and today her dedication is paying off. In 21 years of service to Trion, Middaugh described her job at Trion as, “Your position at Trion is almost everything.” She continued, “Because they train you to work every machine in here.”

Although she says everyday is her best day she remembers when she won Trion’s Employee of the Month Award in May of 1997. She said, “That was a big day for me.” She continued by saying she also received a day off and a Trion jacket that Dorothy still wears today.

Dorothy enjoyed her time working at Trion. She said, “When you come here you can be put any place and that’s the fun of it, the challenge of it. You don’t get bored there’s excitement.” When the owner of Trion, John Thalenfeld, talked to her about retirement Middaugh told him, “John I’ll miss the challenge.”

Middaugh admitted she started to think about retirement five years ago but was not ready. Now she admits it is time, “Now I’m ready because the mind’s willing but the body telling me ‘Whoa Jack’ back up,” she confessed.

On Monday January 30th Dorothy is waking up retired. With the rest of her life in front of her, on her first day of retirement she said, “I’m going to Bill, our chiropractor, I’m gonna have him realign and readjust me so I can get started on retirement.”

From everyone in Trion, we would like to wish Dorothy a long and happy retirement.